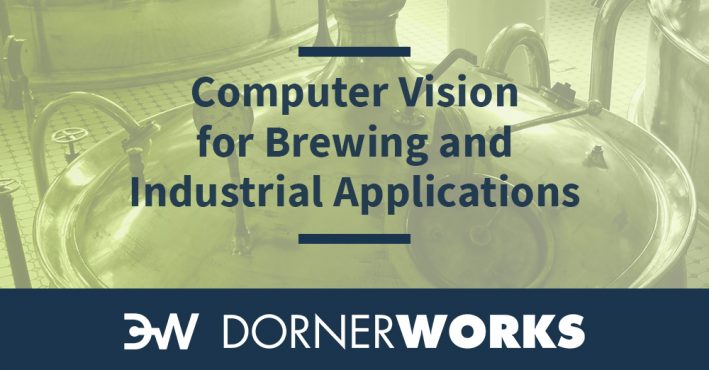 Here’s How Computer Vision and Industry 4.0 Could Make a Big Difference in Brewing, Manufacturing, And More

Michigan isn’t shy about its love of strong spirits. The state ranks fifth in the nation in terms of the number of breweries, microbreweries and brewpubs in operation. Travel to West Michigan and you’ll find an even greater concentration of alcohol aficionados. For more than five years, Grand Rapids has carried the mantle of “Beer City, USA.”

This is hardly a fad. The tradition upheld by brewers and distillers in the Great Lakes State is built on millennia of history. In fact, one of the earliest recorded writings ever discovered, a 3,900-year-old Sumerian poem, details the process used to ferment barley bread in order to make beer.

Today, it may be due for an update. And, a system developed by DornerWorks could soon provide the catalyst for industry 4.0 adoption, in brewing, distilling, and beyond.

Finding a problem to solve

Admittedly, digital sensors and gauges are nothing new to the brewing and distilling industry. Where producers can afford to cover the cost of digital systems, they often do, but the data in these systems is typically relegated to a panel read-out. More robust versions may allow data to be downloaded for logging, which, when dealing in alcohol, regulatory agencies require no shortage of, but they can also be cost prohibitive to all but the biggest outfits.

In contrast, being human, most brewers cannot devote their attention to all of the measurements at the same time. It makes sense that offloading some of that record keeping to a computer could save them time, better spent on their top shelf products.

So, what would happen if the capabilities of those digital monitors were miniaturized, the costs reduced, and that data uploaded to the cloud? Those are the questions the DornerWorks team set out to answer, and did, with computer vision.

A cloud-based solution for monitoring brewing and distillation processes

DornerWorks Chief IoT Engineer Greg Nowak first investigated where such a system would provide the greatest benefit. Measurements in certain segments of the brewing process are more important to the end product than others. Metrics like heat, pressure, and density must be meticulously monitored to ensure consistency and quality from batch to batch. Other measurements, like the amount of alcohol coming through in the “tails,” the barrel dregs of the brew, are less critical to the final product, though still necessary in keeping with regulatory requirements.

Nowak developed the initial prototype for this solution on a Raspberry Pi, connected to a small camera, which was mounted a few inches from an analog gauge. The camera output was run through an algorithm that measured the needle’s movement, digitized the data, transmitted it to a cloud service, and triggered other actions as necessary.

The next iteration of the device would have involved a 3D-printed collar, securing the microcontroller and a camera with a fisheye lens that could easily snap onto the face of an analog gauge, without covering it up completely. With this device, ornate distilling equipment, often a focal point of brewpubs, would not be sacrificing character to convenience.

An even less-intrusive version was also conceived, comprising a wall-mounted high definition camera that could focus on multiple gauges at the same time, collecting data from each, and streaming it to the cloud to integrate with other applications.

When operational, a brewmaster could opt to receive text or email alerts when a particular gauge hits a certain level, or prompt alarms to go off, or confetti to rain from the sky, provided it doesn’t land in the mash. 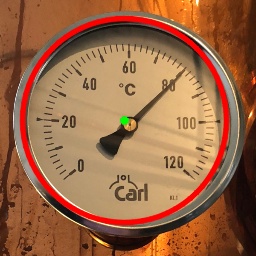 1. The algorithm first identifies a circle and then the center of that circle. 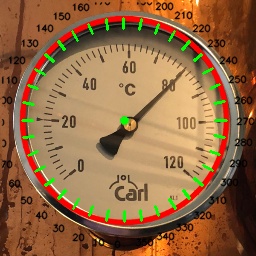 2. The circle is divided into equal segments against which to measure the needle position.

3. A high-contrast image provides greater definition for the measurement. 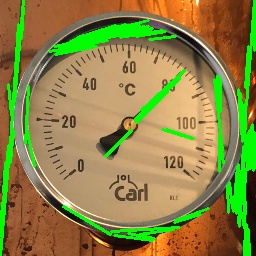 4. The computer vision overlay on the original color image shows how the algorithm “sees” the edges of the gauge and needle.

5. The needle position is translated into a digital value.

The potential applications for this technology span well outside the spirits realm. Passenger trains, cargo ships, hydroelectric dams, hospitals, refineries, manufacturing plants, and more are all heavily reliant on analog gauges, and opportunities for this type of device to be put to good use. The brewing process, meanwhile, predates all of these institutions, and in keeping with tradition, may actually be the least worthwhile field for it.

Modern brewing is a still a sensory-heavy process. Brewers and distillers, especially in small outfits, feel, listen, and taste their product for quality and consistency, and few are willing to relinquish that control to a computer.

Craft beer and small batch alcohol is a rapidly growing industry in West Michigan and the rest of the United States, and while it may be some time before producers welcome the smart devices of Industry 4.0 wholeheartedly, there’s no denying the advantages that technology could enable. Particularly in “continuous” stills, which run constantly, rather than the intermittent use of pot stills in small batch production, a gauge monitor that never gets tired and never takes its “eyes” off the target could prove invaluable, and very cost-effective.