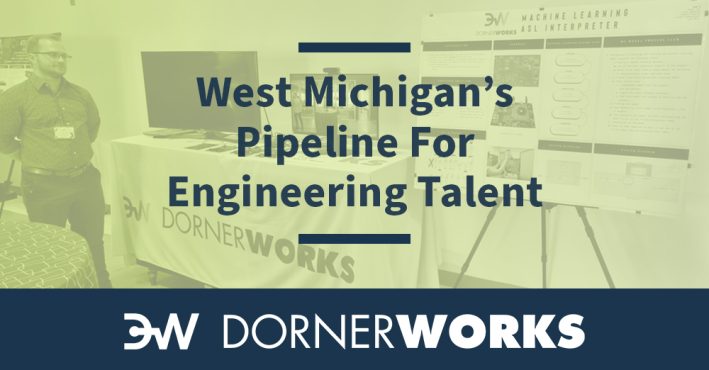 A good embedded engineer knows that their most important tool is their expertise in understanding technically complex systems and their potential for enabling development of next generation products.

But it takes years of training for that tool to be forged.

That’s why DornerWorks values its relationship with engineering universities like Grand Valley State University. Engineering students at GVSU can participate in a Co-Op with DornerWorks during three semester rotations, (periods of time).

“GVSU’s engineering co-op program has allowed us to grow organically and sustainably with a guaranteed engineering bandwidth of student interns year-round, usually resulting in full-time and long-term engineering employment afterwards,” says DornerWorks Founder and Owner David K. Dorner. “This has allowed DornerWorks to grow engineering talent within our own staff consistently over the years with local, home-grown engineers. And this experience has helped each and every student grow their own personal resume as we put them to work on real-world engineering projects. We are very thankful for such a tremendous engineering university program right in our back yard and are very pleased to give back as a sponsor for their new Engineering Innovation Design Center!”

GVSU’s Padnos College of Engineering and Computing has long been the main building for Electrical Engineering (EE), Computer Science (CS) and Computer Engineering (CE) students, along with Cybersecurity, Information Technology (IT) and many others. In 2022 the university unveiled the Grand Valley State University Shape Corp. Innovation Center. The new facility features lab rooms and large project development spaces that future engineers will use to design, prototype, and build.

The team sponsored by DornerWorks built an American Sign Language (ASL) Interpreter using a FPGA development board and machine learning algorithm from Xilinx hooked up to a camera and TV monitor. Holding up one’s hand in the form of a character from the ASL alphabet, the camera ingests the image, which is processed on the Xilinx board using a machine learning algorithm and displays the result in the form of a box around the hand indicating the character along with an estimated measure of accuracy.

Several members of this team also served as co-op students at DornerWorks and brought their talents to work with our engineering team during their employment.

“GVSU prepared me for my current role in the Medical group by allowing me to obtain hands on experience with embedded systems,” she says. “The labs and projects within the curriculum in combination with my co-op rotations at DW prepared me to enter my full-time career with confidence in my technical abilities.”

Francis says she was “drawn to engineering in an atypical way,” but found a position that helped her flourish at DornerWorks.

“I originally entered engineering with the intention of being pre-Med, but realized I really enjoyed the technical aspects of the career,” she says. “I realized that the Medical group at DW would allow me to combine my two interests.”

DornerWorks IoT Engineering Group Engineer Josh Johnston participated in the same co-op cohort and as a full-time engineer is working with another DornerWorks team member in porting the codebase from an obsolete Bluetooth controller to a new one.

“The biggest factor that’s at play in my current project is not necessarily the technical knowledge that I learned at GVSU (although that has obviously played an important role), but it has more so been my ability to teach myself new things and problem solve,” Johnston says. “My current project required me to learn a new language and to learn a new communication protocol (Bluetooth). GVSU helped me exercise my ability to do this over the years.”

Johnston says he enjoys working with both software and hardware. He would have needed to focus on just one side or the other had he followed a different path, but the Computer Engineering field gives him the chance to follow his dreams.

“Computers, electronics, and problem solving have always been passions of mine, and the role of an Embedded Software Engineer aligns perfectly with those passions,” he says.

FPGA Design Architect Corrin Meyer acted as the “customer contact” for the GVSU team and set the technical requirements for the project.

“I helped them develop a project plan,” he says. “This involved thinking through how to approach the problem in steps that made sense. Additionally, because of this project was quite technically challenging, we developed a plan that could scale. This meant that we set a goal for the project that we thought the team could make even if they ran into a lot of difficulties.”

Meyer says the result of this project wouldn’t necessary be the final product, “but it would act as a foundation and represent the knowledge and experience that the team gained. Additionally, if the team was able to overcome more of the technical challenges, then there were additional ‘stretch’ goals to strive for.”

The custom hardware design schematic was reviewed by Meyer before it was sent it to fabrication. He also reviewed the technical documentation to ensure it met the project requirements and the expectations of DornerWorks.

Whenever technical issues arose, the team relied on Meyer as a “sounding board.”

“I tried to either provide guidance on how to work through issues as they arose or point them to who else in DornerWorks might have the answers, or if there was an online resource that may be helpful,” he says. “My job was not to do the work for them, but to provide guidance so that they could do it themselves.”

DornerWorks has a long and mutually beneficial relationship with GVSU’s co-op program for nearly two decades. President Shawn Isenhoff recalls joining DornerWorks 15 years ago, when an intern was occasionally brought in from one of a few universities.

“Even at that point GVSU stood out for their program, where interns have multiple rounds of internship and are therefore able to really perform at the level of a someone post-graduation even before they graduate,” Isenhoff says. “GVSU also stood out for their solicitation to both the interns and our company of what can better prepare the students for the needs we have and what can create a better experience for the students. This senior design project is an example of that relationship strengthening in that the professors were willing to stretch the design into FPGAs per our direction and this is something the professors are not as familiar with and have a more challenging time mentoring the students on. GVSU’s willingness to incorporate the needs of DornerWorks has been a steady part of the relationship we have had. That continued pursuit and consideration is much appreciated.”

DornerWorks Intern/Co-op program is open to EE/CE/CS students enrolled at:

If you or an engineering student you know are looking for a workplace where you can flourish, visit our careers page and find a position that fits your goals!