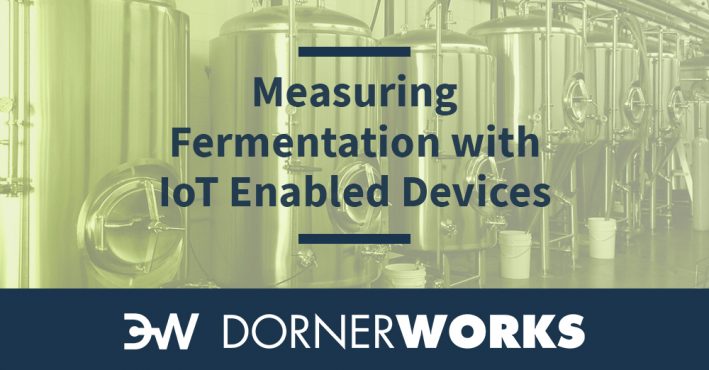 Beer. It’s a popular beverage around the world, but here in Grand Rapids, Michigan, it’s a bit more. There’s a reason it’s received the title Beer City USA. And being the home of DornerWorks we thought it might be good to see if there are any opportunities to put our IoT expertise to work in this industry.

Fermentation is the name of the biochemical process where the sugars in a liquid, typically derived from grains or other organic sources, are converted to alcohol and fizz (carbon dioxide) by yeast. It is the key to making wine, beer and hard cider. Needless to say, with 37 breweries (in 2018) and growing, there is a lot of fermentation going on in Grand Rapids. And because of fermentation’s central role in beer production, monitoring the fermentation process is important to breweries.

We’ve found many breweries use a combination of computer systems and manual samples to do this. But could these manual samples be automated and improved? That was the question we decided to look at closely.

One of the many indicators that quality assurance teams use to monitor beer is the specific gravity. Specific gravity is a measurement of a liquid’s density in comparison to water. So, if a beer has a higher specific gravity than another it means that it has a higher mass given a constant volume. As a beer ferments and converts those sugars to alcohol and gas, the specific gravity falls and the beer gets less dense, eventually approaching a point where there are very few sugars left and the fermentation process slowly stops.

Manual methods of measuring specific gravity have been around for ages. We wanted to explore ways to make continuous measurements with internet-connected devices, however. After doing some research we found some very innovative ways to do this, but there were two specific approaches that we found to be most promising.

First was monitoring the production of carbon dioxide in the fermentation process by monitoring gas flowing through the airlock. The idea is that if you know the quantity of liquid in a vat and can track exactly how much gas is being created in the fermentation process, it is possible to then approximate the specific gravity of a liquid. As sugar is turned into alcohol and gas, this process is quite consistent and proportional. That means a certain volume of gas equates to a certain amount of sugar being consumed and this will equate to a certain change in the liquid’s density.

When it comes to technical solutions, this approach is appealing in terms of cost. Many microbreweries already have a flexible hose that comes off the top of their fermentation tanks to direct gas into a 5-gallon bucket of water (a sort of one-way valve, preventing contaminants from making their way back through the tube into the vat). Fitting that hose with a gas flow monitor would be quite simple and cost efficient. This assumes that monitoring liquid flow into the fermenter or otherwise approximating the amount present would be fairly straightforward – something that we had not yet looked into.

This second solution is great because it could be accomplished with off-the-shelf pressure sensors and no other measurement is needed such as, for example, the volume of liquid present. However, these sensors would need to be installed by a professional welder as most fermentation tanks are made from stainless steel thus increasing the upfront costs of such an approach.

We didn’t yet get the chance to put either solution to the test, but it’s not too early to highlight the benefits we believe brewers would see if they could embrace the IoT revolution in fermentation monitoring. Imagine automated QA, reduced manual labor, reduction in human errors, AI-powered algorithms detecting issues long before a human could, making early predications on completion dates and better, more consistent beer.

Well, is your beer connected?