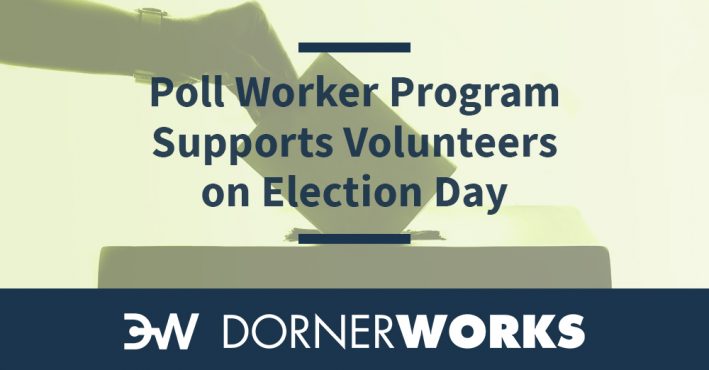 There is a critical need for poll workers who are willing and able to assist with the administration of in-person voting on and before Election Day. According to the Election Assistance Committee, most poll workers have traditionally been over the age of 61, making them especially vulnerable to complications if they contract COVID-19.

When DornerWorks engineer Nick Pahl learned there was projected to be a poll worker shortage for the November 2020 election, he volunteered for the position for the first time in his life. Looking forward to filling this year’s need, Pahl also suggested that DornerWorks’ consider providing a paid day for employees who work at election polls for the Nov. 3, 2020 election. His suggestion was promptly incorporated into our company policy.

What do poll workers do?

There are a variety of different roles available during each election cycle, including poll worker, election inspector and ballot inspector positions, as well as a site supervisor to coordinate them all. Former Chief Separation Technology engineering group manager Jarvis Roach previous served as an electronic poll inspector (EPI).

“I signed up to run the laptop,” Roach says.

A fitting task for an electronics engineer, and like other projects Roach and Pahl are typically called into it required an understanding of the documentation. Roach sat through a 3-hour training session on running the software. And on Election Day he arrived at the voting precinct at 5:45 am to set up the ballot machine, signage, booths, tables, and other necessary equipment.

When the polls opened at 7 am, Roach was one of the first faces incoming voters saw.

People came to Roach looking for information on casting absentee ballots or to confirm they were in the right precinct.

“I’d look them up using the software that had a voter database to help direct them where to go,” Roach says. “If they were at the right place, my precinct, I’d get them entered into the system and work with the ballot inspector to get them the right kind of ballot.”

While Roach helped direct voters where to go, other volunteers helped them feed their completed ballots into the ballot machine, receive their “I voted” sticker and move on.

“At the end of the night I helped tear down and put everything away, and ran some reports on the computer which helped ensure the number of ballots counted by the machine matched up with our records of who came through the line and picked one up,” Roach says.

Why volunteer to be a poll worker?

Voting is an important exercise in maintaining democracy which, like engineering remarkable products, requires buy-in from everyone involved.

Pahl understands this comparison well. He has spent much of the last year optimizing controls on a surgical device and updating the seL4 network stack for use with new applications, including those running on WindRiver’s VxWorks 7 RTOS. Each of these projects are dependent on a user being able to trust a system will operate as expected. Anything else would lose their “vote,” or worse.

In fact, voting can also be an important technique in providing additional safety through modular redundancy. An example is the modular redundancy project Roach completed for the 787 Dreamliner. In this system, a mission-critical version of “voting” occurs at the processor level to reduce the chance for a failure due to ionizing radiation or “random gremlins,” Roach explains.

In a modular redundancy system, greater redundancy equates to more input from “voters” and a better chance the system will perform as expected, even under harsh conditions.

How do I become a poll worker?

Poll workers are critical to the success of an election. Having an adequate number of poll workers to staff polling places on and before Election Day provides voters with the assistance they need at the polls and helps ensure free and fair elections. It’s also easy to become a poll worker. Simply sign up to volunteer, attend the required training, and show up at the polling place before voters arrive.

Along with Pahl and Roach, a number of DornerWorks other engineers and staff members will be volunteering as poll workers this year. Pahl expects to be placed at a voting precinct in West Michigan but said that the east side of the state is in greater need of volunteer poll workers.

If you are looking to further your career at an innovative company that respects the voice of both its customers and engineers, visit our careers page to find an opening that suits you and send us your resume today.