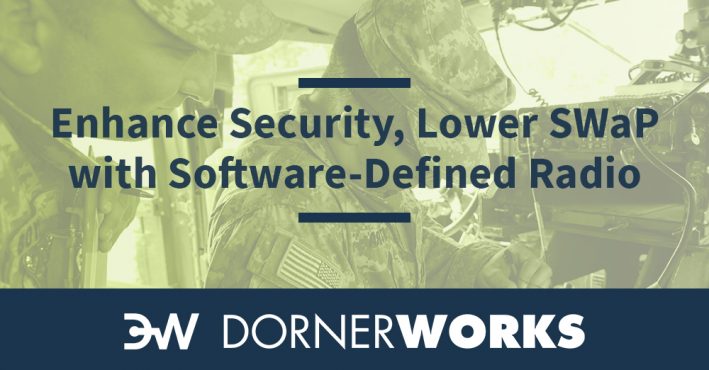 Military communication systems are built to relay important data between warfighters and their mission control facilities. With enemies who are skilled at codebreaking, keeping these channels secure is a matter of national security, and often requires a dynamic response.

Where a “traditional” radio can implement functions like mixing, filtering, etc. using physical components, a software defined radio (SDR) implements these functions in software, making it possible for a system to more easily adapt to threats and other environmental factors. In flight over enemy territory, before the pilot of a US Air Force reconnaissance jet can alert command to suspicious signals, the aircraft’s advanced radio platform can detect a jamming threat and increase power, transmit on a different channel or band, change its mode of operation, or turn itself off altogether to maintain security.

Whereas military radios traditionally have been restricted to operate in one band, SDR enables a much wider spectrum when coupled with the appropriate RF front-end, with the added benefit of mitigating eavesdropping. A single backpack SDR can help troops on the ground call for air support or evacuation over an AM channel, then switch to SSB, VHF or UHF when they move out of range.

What benefits can Software-Defined Radio/Waveforms enable?

SDR systems are already being used in defense aircraft and radar ships, research stations and cell phone towers. When compared to traditional radios, an SDR:

At sea, on land, or in the air, communication channels can be kept more secure by implementing their respective waveforms in software. Furthermore, SDRs have proven useful in cognitive spectrum sensing, compressed sensing, and RF tomography, but this technology has the potential to benefit any application that involves complex digital signal processing (DSP).

“Things get really exciting when you consider how SDR technology can be coupled with machine learning,” says DornerWorks engineer David Norwood. “That is, the outputs of these DSP functions can be used as feature vectors to certain machine learning models, models that can detect certain threats, identify modes of operation, and even identify non-communication-based characteristics in an RF band of interest to effectively turn the radio into not only a communications tool but also an environmental-awareness type of sensor.”

Direct RF-to-digital conversion on the Xilinx RFSoC is a lower SWaP-C solution when compared to current systems used for signal translation and conditioning, which in turn make an RFSoC based system flexible enough to fit aboard discrete reconnaissance aircraft and radar systems just as it can terrestrial radio towers and ground vehicles. DornerWorks is currently developing an SDR enablement platform for a major defense contractor using Xilinx RFSoC, and we can help you build a stronger business using SDR, too.

Contact DornerWorks today to set up a free meeting, and we will discuss plans to build your next advanced radio communication platform using software-defined radio technology.