Imagine sitting in a doctor’s office, the physician wheels in a cart of electronic equipment, attaches a few electrodes to your skin, and asks, “Do you have any idea how this works?”

Along with the task of helping patients without arms regain their freedom, prosthetists and routine care providers are long been tasked with translating complex software instructions when working with their patient’s devices. In one particular case, as many as seven different software packages were required for the practitioner to interface with a mechanical prosthetic arm.

College Park Industries came to DornerWorks wondering whether they would be able to put their ideas in motion. Through iterations and a collaborative partnership, DornerWorks helped them build a product that outpaced its competition though ease of use and eager adoption by pleased heath care providers.

College Park was hoping to improve upon their design for a prosthetic elbow. The model they had been working with for some time was functionally adequate, but hard for technicians to interface with and use. Understanding that much of their existing technology could be scrapped for the next generation, they needed a partner who could guide them through the full lifecycle of application development.

DornerWorks navigated College Park toward a mobile application for tablet/laptop usage, which allowed the practitioner ease of movement, and a greater understanding of their patient’s issues. We guided their interface toward a beautiful and simplified new design, streaming live data from the prosthetic device. The hardware team designed the boards to be used in the device, the firmware team wrote the software for the boards, and the web development team wrote the mobile app and website.

Inside the device, an NRF52832 Bluetooth Module was used to provide connectivity, while the main board and DSP are both fitted with a Microchip SAM E70 ARM microcontroller. 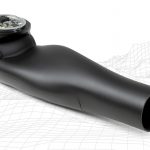