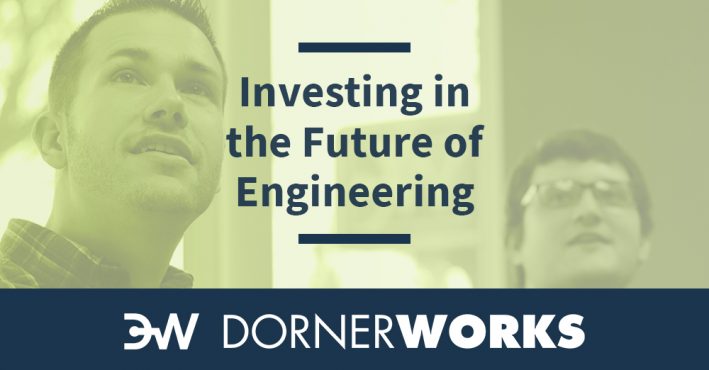 How do you best prepare for the future?

Even the device you’re reading this on is going to be outdated in a matter of months, maybe sooner. Technology is constantly evolving to solve problems both new and old. But it’s not adapting on its own. Innovation doesn’t occur without the engineers, developers, and program managers driving it, and at DornerWorks, that cycle is driven by an influx of the brightest young minds in engineering and computer science.

A number of students have come to DornerWorks by way of the 30-year-old Grand Valley State University co-op program, as well as those from other schools. These students have gone on to accept full-time engineering positions after graduation and are currently working on some of the most impressive projects at DornerWorks.

They have demonstrated their passion for embedded technology, and are truly making a difference as makers and mentors in the work of computer science and electronics engineering.

DornerWorks is proud of the relationship it’s cultivated with GVSU, and has set a goal to transition interns and co-ops into full-time positions whenever possible. Based on the continued achievement of that goal, the company was named “Co-op Employer of the Year” by the university’s engineering department in 2012, and in 2014 was the sponsor of the school’s Outstanding Senior Project in 2014. DornerWorks has sponsored projects from other Michigan-based schools as well.

Former co-ops Aaron Crump and Nicholas Pahl, along with several others, were instrumental in the most recent GVSU senior design project, covered by engineer John Wallace in this blog post. They worked together to build a system that updates doctors and nurses in real-time on their patients’ vital data.

Now full-time employees, Crump and Pahl provide DornerWorks with expertise in the respective fields of computer engineering and electronics engineering. Crump’s first project involved testing and modifying hardware for IoT applications, later moving on to development in the Python programming language. During Pahl’s first rotation with the company, he was assigned to run test suites on ruggedized computers designed for military-based Humvees and Apache helicopters, testing different hypervisors and configurations.

“I am very comfortable with Python, but I didn’t know it existed when I started as a co-op, and I’m much more proficient with C programming now,” Crump comments on his early experience at DornerWorks and lessons learned since then. “I’m significantly more confident with Linux. Engineering programs touch on Linux very little considering how important it is to many systems and engineers. I learned a great deal about real world analog hardware vs the theoretical things they teach in school.”

The opportunity to work alongside experienced engineers is invaluable to engineering students. Hands-on experience not only provided Crump with a better understanding of programming in C and Python, but demonstrated to him and other young engineers, the group dynamics of a successful software development team.

“My experiences at DornerWorks have helped me to improve my critical thinking skills, and develop the kind of intellectual flexibility that is required for complex problem solving,” Crump says.

Now working on FACE conformance for the DornerWorks-developed Virtuosity Hypervisor, Pahl has been able to translate his co-op experience with developing for Linux machines, secure technologies, large code base projects, and embedded development tools into a skilled approach to speeding up design processes and getting as close to target systems as possible.

Kevin Mahlie is in his third and final co-op rotation. Currently majoring in electrical engineering at GVSU, Mahlie is focusing on embedded system development in his studies, while contributing to hardware modifications, circuit debugging and testing at DornerWorks.

“Through my co-op experience I have gained tremendous amounts of skill in both hardware and software development,” Mahlie explains. “I am now much more confident in all aspects of hardware development and analysis. That being, solder work, board modifications, circuit debugging, circuit construction, communication network analysis, circuit design, schematic design, board layout design and more. From a software standpoint I have learned how to use and be comfortable working in a Linux operating system. I have become confident in Linux development and modifying/building kernel images as well.”

An improved technical acuity is one of the most immediate benefits of coming to DornerWorks as a co-op or intern, but a greater understanding of working with a professional team is arguably just as important.

“DornerWorks has allowed me to work on projects teams and build my communication and team work skills,” Mahlie says. “I also gained experience interacting and working with customers while on the VR project. I was constantly visiting their HQ and working alongside their engineers to finish the project. This was great experience that I don’t believe all co-op students are able to obtain.”

The skills Mahlie has gained while at DornerWorks have helped him both in and out of the classroom, he says, now able to apply technical knowledge when designing PCB’s for projects and understanding the basis of embedded systems between software and hardware integration.

“This has also assisted with my work on the GVSU Formula society of Automotive Engineers (SAE) team through the development of the embedded smart paddle shifter system,” he says. “I have been able to use my acquired professional skills when working on the FSAE team to share and teach my knowledge as the lead electrical engineer and when communicating with other teams about their own work.”

The co-op program at DornerWorks isn’t simply an extension of the classroom. Students that are brought to the company are connected to real-life projects, and given the opportunity to contribute to them in meaningful ways. Former GVSU co-op and current full-time DornerWorks engineer Luke Ganzevoort was placed on one of the company’s developing consumer-focused Internet of Things (IoT) projects immediately after arriving for his first rotation year.

He successfully helped design and debug a circuit board for the client, as well as write code that is still used in their products today.
The next time you press a button on a wireless Traeger grill console, you may hear the distinct buzz of Ganzevoort’s work, while the drivers and encoded rotary switch he helped build run silently in the background.

DornerWorks offers the opportunity to become part of a team of talented engineers working on interesting projects for a diverse group of clients who lead the industries of aerospace and defense, automotive technology, industrial applications, consumer products, and healthcare.

And there’s always room to grow.

Once an intern himself, DornerWorks Chief Software Engineer Anthony Boorsma was first assigned to hardware design when he came to the company. He now leads the embedded Linux build and application software development for one of DornerWorks’ largest projects.

DornerWorks will continue to foster a relationship with local university engineering programs, and intends to bring in more co-op students and interns each year. As the horizons of IoT, FPGA design, secure technologies, and hardware and software development continue to expand, our continued expertise in these areas will depend on them.

If you’re a computer science or electronics engineering student, or are looking for rewarding and challenging career in embedded technology, visit the DornerWorks Careers page and see what opportunities may be in store for you.