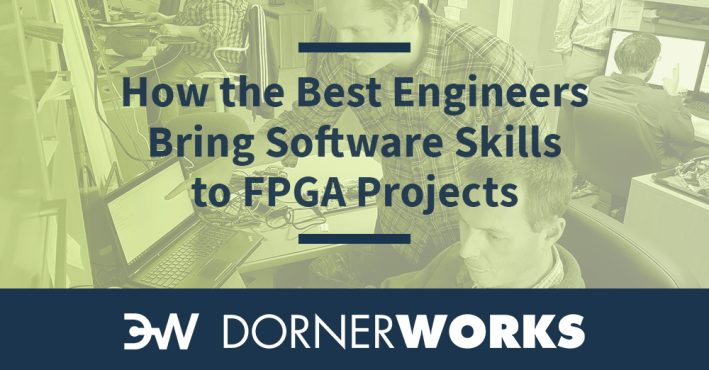 It was a dreary morning. Sam pulled himself out of bed at what felt like 2am to get dressed and ready for another commute into the office. Although the winter blues were surely in full effect, Sam knew that he was facing a greater internal battle. Like many other software engineers in the industry, he knew that he had reached a plateau in his career; Sam craved a role where he could fully engage his expertise for working with complex technologies while also embracing innovative, challenging, and diverse projects. He dared to consider two additional wish list criteria: Flexibility for a hybrid work modality and the opportunity to reach new ceilings in the industry.

As Sam pulled into the parking lot just five minutes before he had to confront logging on for another day, he scrolled LinkedIn hoping to find something that would deposit a sense of hope for a future career change. He noticed that one of his connections had interacted with a job opening at DornerWorks. Upon further exploration, Sam was able to identify two internal employees, Aaron and David, who had reposted the job. Although his team’s status beckoned his attention, he couldn’t help but continue down the rabbit trail after reading Aaron and David’s personal anecdotes accompanying the position description.

“My role at DornerWorks has been rewarding and exciting as I have implemented key contributions to consumer products in leading organizations,” Aaron wrote. “Vehicle systems for military personnel and aerospace projects including software for commercial airplane sensor management and networking and additional powerful development initiatives for IoT!”

Sam had FPGA experience, having taken a class on hardware design in school, and an even longer period spent tinkering with a MiSTer FPGA-based video game emulator on his own. Reading further he discovered that his skills in C and Python programming would be valuable in that role, as well. Learning DornerWorks is a Xilinx Premier Partner, he could also appreciate the opportunity to work with the latest silicon devices and development tools from Xilinx like Vitis, Vivado, and Petalinux.

Alongside next-generation technology, Sam also found more on the innovative and supportive workplace culture he had been looking for.

“It is commonplace for us in the FPGA group as our senior FPGA and software engineers work together to develop cutting edge FPGA and processor-based systems where the goal is often to fit an enormous amount of capability on a single FPGA,” David wrote. “DW is unique in that our FPGA and SW engineers do not work in separate isolated departments. Rather, we work in an integrated department which allows us to barter and make trades nearly every day to get the required functionality while meeting resource limitations and power budget for the intended product.”

Sam learned more about what a typical day was like for FPGA engineers on DornerWorks team in the job listing. He found that one of the most common tasks was estimating the effort necessary to design and implement a system, like a switch for example. As an FPGA engineer, Sam would also be responsible for writing requirements and design documents, user manuals and other important resources. With enough experience, he could even develop project management skills while leading and mentoring a team of engineers.

This was it for Sam. The formal job description was the cherry on top. He applied through DornerWorks Careers page as soon as the clock hit 5p.

Where did the story end for Sam? At DornerWorks, of course! By taking a chance, and making the career move, Sam now enjoys dynamic projects that embrace his talents and stretch his capabilities as an FPGA engineer. He enjoys a hybrid and flexible schedule and finally trusts that he has landed in an organization that prioritizes a people first culture.

If you resonated with Sam’s testimony, you’re in luck because we are growing our team rapidly. Visit https://dornerworks.com/careers/opportunities to discover a career that resonates with you!