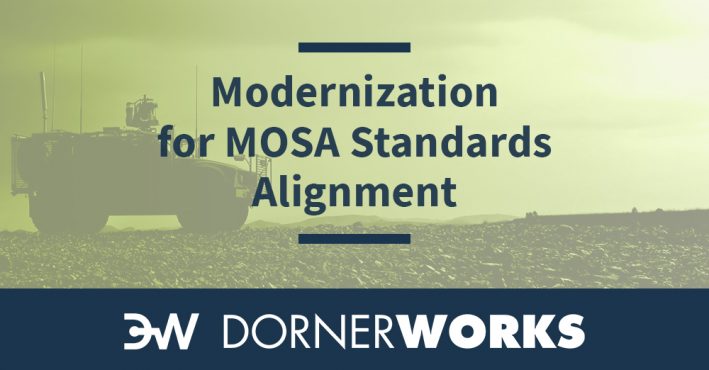 The Modular Open Systems Approach (MOSA) standard adopted by the Department of Defense lowers risk and accelerates innovation by enabling interoperability between software components. However, many existing systems were developed and certified before this standard was implemented, leaving legacy devices at risk of losing access to a critical market.

There is a solution for those facing an early obsolescence. DornerWorks helps companies accelerate development of MOSA-aligned products with deep expertise in software, hardware, and FPGA design, as well as niche areas like Ethernet networking and RF platforms.

A team of DornerWorks engineers demonstrated “Modernizing Legacy Defense Systems to be Compliant with Open Architecture Standards” at the 2021 NDIA Ground Vehicle Systems Engineering and Technology Symposium, Survivability Technical Session, using the case study of a solution we developed to bring a defense company’s legacy system up to the Modular Active Protection Systems (MAPS) standard. MAPS was designed and developed with a Modular Open Systems Approach in order to support interoperability with many of vendor solutions readily available for both sensing and eliminating threats.

The company had developed an active blast mitigation system which effectively mitigates launch acceleration, jump height, flight duration and slam-down, caused by IED and mine blast to increase the protection of the vehicle’s occupants. The system was developed to be compliant to the latest DoD standards at the time, but like many others it was developed before the MOSA standard was implemented.

The system needed to be adapted to the MAPS standard, and DornerWorks guided the company to a solution.

This modernization effort to bring the system into compliance with the MAPS network “has showed that there is not a single perfect approach in modernizing a legacy system, rather a single best approach,” write the DornerWorks team of Alec Kwapis, David Johnson, and Stewart Hildebrand. “The best approach should minimize modifications to the legacy system’s code base and should be architecturally appropriate for the system. An understanding of MOSA principles should not only guide legacy system modernization but should be used effectively in the creation of new defense acquisition programs. Effective use of these principles will inevitably lead to the success of defense programs.”

Low-latency and deterministic communication in the MAPS standard is a requirement to effectively integrating vendor technologies. Legacy Ethernet facilitates this requirement with a high-speed, low-cost common network with proven support for modularity and interoperability. The Deterministic Ethernet protocols adopted by the MAPS program enable further precision by constraining latency and jitter and guaranteeing bandwidth availability.

DornerWorks approach to updating the active blast mitigation system implements all deterministic Ethernet maintenance traffic and protocols, while still keeping the legacy system’s native communication methods. This reduces cost, schedule, and risk to integration efforts for companies that develop MOSA-aligned products. It also allows the US Army to stay focused on the integration of technologies that enhance capability, rather than policing MAPS Framework compliance.

As threats to modern warfighters continue to evolve, enabling vendors to assist in active protection by introducing their state-of-the-art technologies is critical to continued evolution of protection for ground vehicles. Companies building MOSA-aligned threat mitigation systems can build their products with DornerWorks to ensure their products make it to market and save lives.