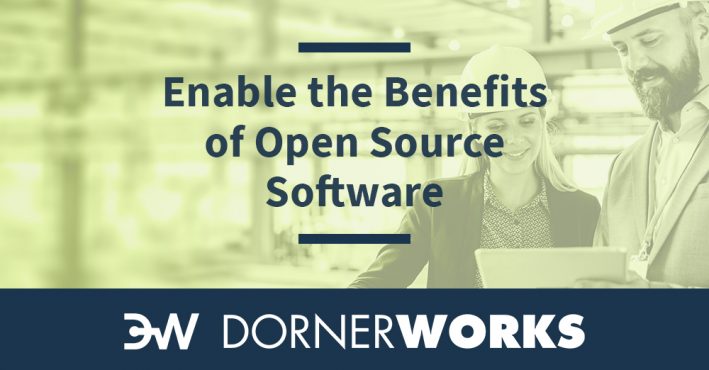 If open source seems confusing to you, it’s easy to think of it like lemonade.

We all know how it’s made, and on a hot day, you might even find some neighborhood kids mixing up a batch in their garage.

Maybe they forgot the sugar, maybe they added a little too much. It doesn’t matter, you can get more one street over. It’s not the recipe you’re paying 50 cents for, it’s the refreshment.

The world of open source technology isn’t too dissimilar. The recipes are free, with testing and documentation to back up their value. But many people may be hesitant because of the perceived downsides:

Some of our favorite Open Source tools:

The software engineers at DornerWorks have been working with open source tools such as Audacity, Blender, Ubuntu, Yocto Project, seL4, Xen Project and more for nearly two decades. We’ve seen the benefits of open source technology first-hand, and have found that there is great value for product developers and business relationships. Here are nine distinct advantages we have noticed from open source technology:

Here are some other key areas where open source technology can provide your business or project with a distinct advantage:

It is not just free software. Developers can build entirely new solutions without red tape and costly licensing fees. Open source provides an inexpensive system for development in even the most regulated fields, like aerospace and defense.

2. Open source has a supportive community

The number of open source developers and advocates is growing by the day. The combined expertise of this population is not only available to businesses just getting started but regularly aids seasoned organizations in product ideation, design, and maintenance. New solutions can be introduced faster, and implemented more effectively, with a global community of developers working together.

It takes less than a few clicks to get lost the branches of some GitHub repos. That’s also the value of the system. The code base, and previous updates to it are completely visible. Important details are not hidden behind a proprietary wall. Essentially, what you see is what you get, and vice versa.

In contrast to the small, specialized review teams of large software companies, open source releases are open to be meticulously scoured by the community. Many more pairs of eyes are looking at the code base, which developers can lean on from the first few iterations on through to more mature releases. Open source code is reviewed by everyone from established engineers and security experts, to those just starting off in the field.

5. Open source won’t lock you in

There’s less worry in open source development of finding a project critically reliant on proprietary tools a vendor may one day decide to charge more for, though some open source development may still use those tools. The flexibility of truly open source technology allows developers to add or remove features and find new tools as necessary, without being on the hook for a lengthy (and costly) contract.

The recipes are free, with testing and documentation to back up their value. But many people may be hesitant because of the perceived downsides. Open source code is developed by experts, tested, retested, and tested some more. By the time it reaches your machine, it is likely to have been reviewed by many more engineers than the equivalent proprietary code.

7. Open source has your interests in mind

As they need to pass the rigor of the global developer community, open source products are often built to provide robust solutions, not just meet a bottom line.

8. Open source can get you to market quickly

If you have a computer and an internet connection, you’re more than halfway there. Open source solutions are free to download and use immediately, which is a huge advantage when deciding which tools or software to integrate into a project.

9. Open source is here to stay

The number of companies and developers contributing to the open source community grows day by day. The undeniable advantages of open source technology are being leveraged by small businesses, massive enterprises, government agencies, even the armed forces, because they see the value and potential within.

If you are considering open source software for your next development, DornerWorks can guide you to success. Contact us today for a free consultation, meet our team of experienced software engineers, and tell us about your product goals.