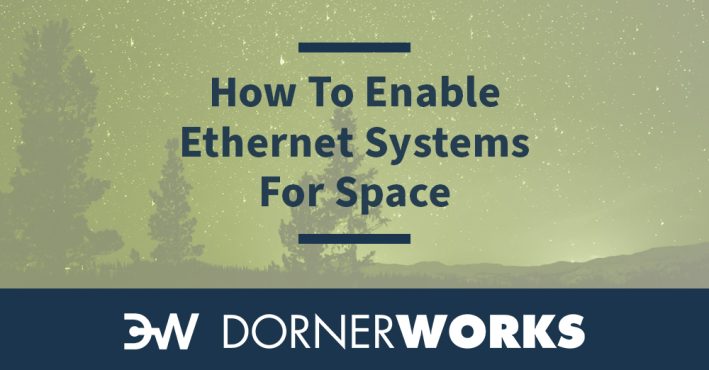 Space exploration is driving a rapidly growing industry, and innovative companies are eager to launch products that improve the quality of life for the interplanetary travelers of today and tomorrow.

An aerospace company approached DornerWorks for help with developing a solution that would enable Ethernet networking for astronauts aboard NASA’s Artemis mission to the moon and eventually Mars.

With the foundation of Microchip RTG4 FPGA-based platform that features built-in TMR flip-flops, DornerWorks helped reduce the barriers of Ethernet networking in space, enabling travelers to communicate with colleagues and loved ones back home using a broader range of commercial off-the-shelf (COTS) devices.

As the first radiation-tolerant switch IP, the multiport Gigabit Ethernet Space Switch IP solution fills a void in the industry. DornerWorks refined the MAC and switch IP and have expanded the potential of this Ethernet networking solution to Microchip PolarFire and RT PolarFire FPGAs.

FPGA engineer Brian Douglas ported a version of DornerWorks 1 Gb Ethernet switch targeting the RTG4 FPGA design to the PolarFire FPGA by regenerating some of the IP cores in Microchip library.

A small challenge arose when addressing the clocking circuitry because of the dissimilarities between the two device architectures.

Douglas also slightly modified a few AXI interconnects and leveraged the capabilities of the PolarFire FPGA design library for additional flexibility and performance.

After porting the Ethernet switch IP to PolarFire, a simple conversion was done to get the IP to run on the RT PolarFire FPGA.

With this, developers can build their prototype with the commercial PolarFire FPGA to compensate for temperature and radiation ranges without using the rad-tolerant part until it’s necessary to move into production.

The DornerWorks Gigabit Ethernet Switch is the first solution to support Gigabit networking over Ethernet in the harsh radiation environment of space. This product supports NASA’s Orion project with the twin goals of being a high-performance Gigabit switch with rad-tolerant and low power requirements.

DornerWorks Gb Ethernet Switch is the first solution in the universe to support Gb networking over Ethernet in the harsh radiation of space.

This product supports NASA’s Orion project with the twin goals of being a high-performance Gb switch with rad-tolerant and low power requirements.

If you need to enable radiation-hardened Ethernet in your products, schedule a meeting with our team today. We will help you accelerate your time to market with a robust and precise networking solution built to handle the harshest environments on Earth or in space.