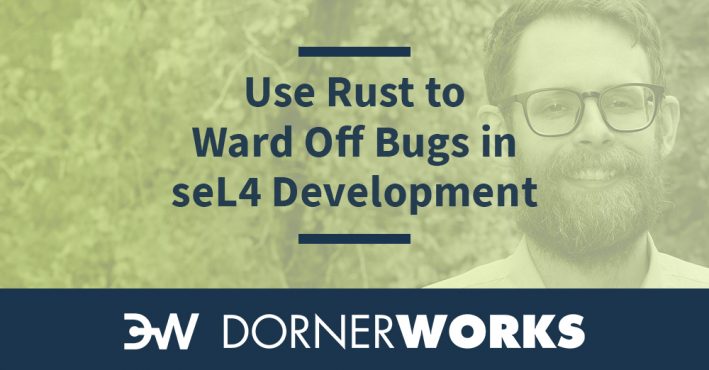 The Rust programming language and the seL4 microkernel maintain strong focuses on both memory safety and performance, making the two great compliments of each other. The formal story surrounding Rust has not reached a level of maturity that would enable it to be a viable option for the seL4 kernel space code, which is largely modeled in a higher level specification language and/or follows a subset of C that Data61 has modeled. However, the minimal runtime and ability to compile to object code makes it a natural fit in userspace. DornerWorks, as part of it’s continuing efforts to increase seL4 adoption, have done some preliminary experiments using Rust in the seL4 userspace.

Combining userspace programs written in Rust with the seL4 kernel helps to eliminate bugs from userspace down through the kernel. The formal proof of seL4 eliminates entire classes of bugs in the kernel, while higher level language constructs of Rust, such as the strong type system, also eliminate large swaths of bugs. This blog also focuses on integrating Rust into the Userspace but not wholesale replacing it like the others do.

This is not the first attempt to use Rust in the seL4 userspace. Other notable efforts to combine Rust and seL4 include:

These, however use the Rust Cargo tool to run the build process. This means that the rootserver is written in Rust and is the entry point for userspace.

The current Rust on seL4 guidance is no longer supported as it depends on depreciated tools and outdated versions of Rust. Since then, Rust has come a long way and stabilized many tooling and language features needed for easier cross-compilation project integration.

Follow along to see how to integrate Rust code into the traditional seL4 build system and call Rust routines from C, while using stable recent versions of the Rust toolchain. This will target the 64-bit ARMv8 architecture and will simulate on QEMU, targeting the ZCU102.

You can install the rust tools with the rustup.sh tool:

Running the script will work for most Linux distributions that you would use for development. Some source-based Linux distributions may require a certain version that is installed and managed through the distributions’ package manager so extra work may be required to get the latest stable Rust version.

CMake/Ninja has been the build system generally used to build seL4 based systems since version 10.0. The CMakeRust project from Devolutions is used in this project in order to call rust and cargo commands from CMake and allow specifying targets for other CMake projects to use. At this time, a fork of CMakeRust is used, which allows specifying the target architecture from the CMake call.

The manifest file for this project places the CMakeRust project under tools. The manifest is available at https://github.com/Jesse-Millwood/rust_sel4_manifest. The project can be initialized with:

The simple application can be found in projects/sel4rustapp.

In this example the rust application’s directory structure looks like:

The Cargo.toml indicates that the rust application will be a static library:

The CMakeLists.txt uses the CMakeRust project to indicate to the build system that this is a Cargo project and which architecture to target:

This application doesn’t do anything seL4 specific and actually doesn’t even use the Rust standard library or make seL4 system calls. In order to indicate not using the standard library, a #![no_std] macro is used. The simple lib.rs just contains:

The lib.rs file also contains a definition of a panic handler. Because this is a non-standard library, a standard panic handler does not exist but the developer is required to include one for compilation. This panic handler and the following lines of the Cargo.toml were taken from the phil-opp blog post on creating a freestanding Rust binary:

In this case, the library will simply abort on a panic.

This application also contains a C rootserver application. The CMakeLists.txt handles the linking of the static Rust library by adding rust_app to the list of files handed to the target_link_libraries call.

The following declaration is added to the top of the main C file of the root server:

The following chunk is used in the rootserver main function to show simple passing data to the
linked Rust library:

Building the application is handled just as most of the other seL4 applications are:

QEMU is used for simulation here:

In order to make a more fully featured Rust library, a number of changes need to be made to allow seL4 system calls and standard library calls from the application:

This post showed how to use the CMakeRust project to lay the ground work to easily integrate a baremetal Rust static library with a simple seL4 rootserver. There is still much to be done to enable developers to write in the languages that fit their use-cases in seL4 userspace applications. Rust is a natural fit for seL4 userspace applications because of the shared focus on safety and performance. DornerWorks is always looking for more ways to enable customers to bring their solutions to safe and secure platforms. Visit our seL4 services page to see how we can enhance the security story of your projects or bring your favorite runtime (e.g. Ada) to seL4 userspace.